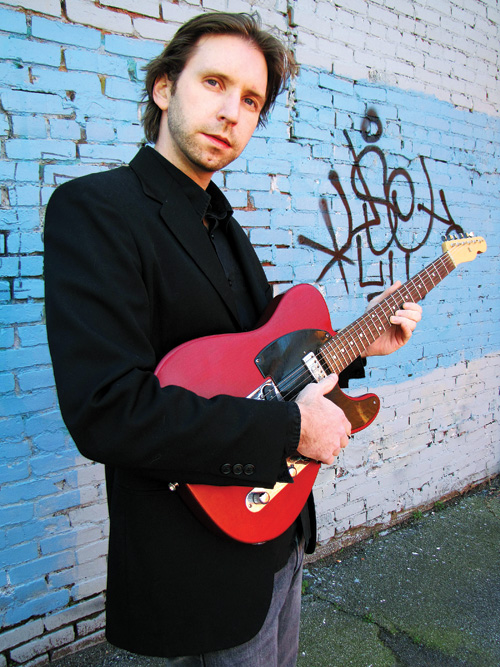 After spending nearly a decade with harp ace Jason Ricci, guitarist Shawn Starski has stepped out with a self-titled album that establishes him as a triple threat, not simply a guitar ace.

It’s a position he’s not altogether comfortable with, mostly because, prior to composing its songs, Starski had never written lyrics.

“I wrote a lot of the music with Jason, but I don’t think of myself as a songwriter or singer; I always just thought of myself as a guy who writes music and had other people write lyrics for it. But I’m studying lyrics more now, and finding out why certain people are so relevant because of their lyrics!”

After leaving Ricci’s band a couple years ago, Starski toured with roots singer Kelly Hunt. And he recently joined Otis Taylor’s band. “Otis is great to work with – and funny. At a gig one night, he told me, ‘I’ll give you a lot of freedom. You can do whatever you want. I’ll give you so much freedom you can hang yourself!’ I think I did an okay job that night.”

Starski says Taylor’s music fits his style. “He’s going for that trance thing, and I’ve always been into one-chord blues with the drone note you play on top of to make something happen. We have a kick-ass drummer, great bass player, great fiddle player, and Otis just grooving in that pulse. They throw it in your court and you make it exciting.”

Joining the band of the veteran blues man prompted a change of instruments, too. With Ricci and Hunt, his main axe was a Fender ’62 reissue Strat. “With Otis, I wanted to go for a different sound all together, so I’m using a 2001 Gibson Les Paul. With Jason and Kelly, I always had that clear tone. The Les Paul gives me a bit of a more saturated tone that fits with Otis’ music.” He’s also a fan of Jeff Clements’ instruments.

On the road, he has been running the Les Paul through a blackface Fender Deluxe Reverb borrowed from a friend. He owns a ’65 Fender Super Reverb that he used on the album, along with a Category 5. And while the disc is predominantly blues, R&B, and soul (with help from singer Elle on two cuts), there’s a definite lean toward jazz on “Hallows Eve.” Though Starski grew up on Hendrix and old blues, he listens to his share of the form.

“I listen to the old cats like Wes Montgomery, Joe Pass, and George Benson. I love Django. And I really like stuff from more-modern guys like John Scofield, Larry Carlton, and Robben Ford. I listen to all of that music regularly.”

While he’s mostly known as a sideman, he hopes a gig that’s a little more high-profile, like the one with Taylor, will help his solo career grow. “With Jason, we built that up from nothing,” he laughs. “But now I’m with Otis, and he’s got a lot of great people coming to see him, a lot of good contacts. So, to have my own release right now is a good thing. I’m trying to create a presence with this record so I’m not a complete unknown. So, if I’m trying to sell myself to a club or festival, at least I know my record has some activity and word is getting out. Six months from now, we’ll see where I am and see what kind of gigs I get. I just want to be able to stay out there.”

As for the new album, he’s obviously happy to see his initial solo project come to fruition.

“It’s something I started almost two years ago,” Starski said. “I made a demo just to see what was working, and it was supposed to be released, but the record company kind of fell apart. So I put it out myself. It took a while to make it sound the way I wanted, but I found the right guy – Michael Saint-Leon – and he did a fantastic job.”