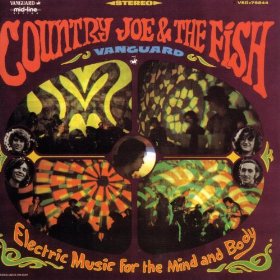 Country Joe and The Fish were one of the most original, eclectic, and just plain good San Francisco bands of the mid to late ’60s. Joe McDonald, in particular, wrote songs that were complex but accessible; David Cohen doubled on guitar and Farﬁsa organ; and if the Airplane’s Jorma Kaukonen was the “best” lead guitarist of the psychedelic era, Barry “The Fish” Melton was the “most” psychedelic, incorporating blues, Eastern, jazz, folk, and beyond-categorization elements.

On two CDs, the original mono and stereo mixes of their ’67 Vanguard debut are presented for the ﬁrst time. Not to minimize the group’s instrumental chops, but the mono mix is more forgiving. Samuel Charters was already an esteemed producer, credited with LPs by Junior Wells, Homesick James, Charlie Musselwhite, and John Fahey. However, the band’s second self-produced Rag Baby EP, a year prior, includes superior versions of “Bass Strings,” “Love,” and especially Melton’s tour de force, “Section 43” than those here (worth ﬁnding on CD).

But there’s a lot to like here, from the funky “Not So Sweet Martha Lorraine” to the slow blues “Death Sound,” with a Melton/Cohen guitar duel.

A bonus: the 40-page booklet with Alec Palao’s extensive notes and song commentary from the band members.