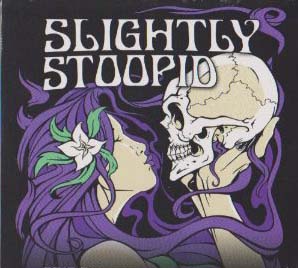 Slightly Stoopid is a group of friends who have been making music since their teenage days, mixing reggae, funk, R&B, and punk. They also play acoustic rock that lets two front men, Miles Mason Doughty and Kyle J. McDonald, show off some chops while they trade between the bass and guitar. Both are able soloists and more-than-able bass players, supplying the foundation for a very rhythmic style of music.

This two-CD, one-DVD set captures live performance at TRI Studios and brings in friends like Ivan Neville on organ and Ian Neville on guitar. Both supply stirring solos when called upon. The Grateful Dead’s Bob Weir also sits in on a few cuts adding vocals and some old-school solos.

The band is pure funky, and the vibe is one of good friends and good music; it’s not unlike a party you might have with musician friends in the backyard. That’s what this band is about, and that’s what makes this album work so well.

You should be forewarned: if you’re easily offended by obscenities, you’ll want to stay away. But if you’re okay with that, you’ll be rewarded with lots of good music and an interesting interview segment with the band moderated by none other than Tommy Chong.