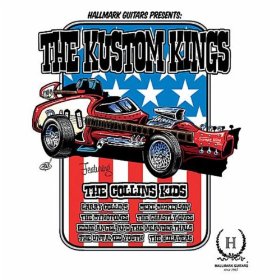 It’s not unusual to see compilations deﬁned by region or style; this one focuses on players who share the same brand of guitar: Hallmark.

The Hallmark company was launched in 1966 by Joe Hall, an ex-employee of Mosrite Guitars in Bakersﬁeld, California. Setting up shop in nearby Arvin, he enlisted another Mosrite builder, Bill Gruggett. Reﬁning a design sketched by the Ventures’ Bob Bogle, the Hallmark Swept-Wing was born – resembling sort of a reverse “V.” It’s estimated only three dozen or so were made, along with Gruggett’s oddly shaped Stradette (picture a Hofner violin bass with moose antlers).

In the late ’90s, luthier/collector Bob Shade acquired the rights to the Hallmark name, and the revived Hallmark company now makes Swept-Wings, the exclusive signature-model replica of Johnny Ramone’s ’65 Mosrite, Stradettes (collaborating with Gruggett until his recent death), and even some models based on custom cars designed by George Barris, creator of such automotive icons as the Batmobile, the Munsters car, and the Voxmobile.

Possibly the deﬁnitive examples of American design in the ’50s and ’60s, hot rods and electric guitars have been inextricably connected (and as any male VG subscriber will attest, the only babe magnet stronger than a cool car is a basement full of guitars).

There’s a roots-rock continuity here (granted, a pretty broad category), but there’s no “Hallmark sound” on display. The main thing the artists have in common is their attachment to models that are ﬂashy, over the top, and sometimes downright wacky. And that visual element is as big an attraction to this album as the music itself.

The 12-song collection is available on CD as well as a limited-edition LP on gold vinyl.

“Raider’s Coach” by the Ghastly Ones, featuring Garrett “Dr. Lehos” Immel on lead Stradette, pays tribute to Paul Revere’s legendary band (speciﬁcally “Steppin’ Out”), with drummer Norman “Baron Shivers” Cabrera’s full-throated vocals tipping his top hat to Mark Lindsay. (The band dresses like undertakers, and, instead of a go-go girl, they have a go-go ghoul, “Necrobella.”)

Eddie Angel and Pete Curry of Los Straitjackets morph into the Neanderthals. Their bass-string instrumental “Flintmobile” utilizes the Rock N Bones model, which looks like a dinosaur-bone neck attached to a body made out of a boulder.

In strictly musical terms, the performances and material are better than most surf/hot-rod revival releases (although Dickerson’s “King Of The Kustomizers,” about Barris, would make better liner notes than lyrics), and the fun factor is mighty high. But when you add the package (your preference, but the pics in the 12” foldout version pop more), the cool (or “kool”) factor goes up considerably.