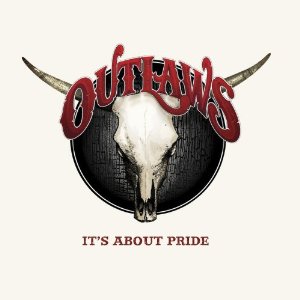 To expect a record by the Outlaws to sound this good in 2012 would be folly. The band hasn’t released a studio album in more than two decades and two of the main guitarists from the original band – Hughie Thomasson and Billy Jones – are dead. The remaining original guitarist, Henry Paul, has resurrected the band with the help of original drummer Monte Yoho and former Charlie Daniels Band guitarist Billy Crain. And, against all odds, It’s About Pride captures all the things that were great about the original Outlaws.

The opener, “Tomorrow’s Another Night,” kicks in with the kind of harmonized vocals that dominated the ﬁrst couple of Outlaws records from the 1970s. The a capella vocals give way to churning rhythm guitars and a tough melodic solo part that eventually ﬁnds Paul and Crain playing a harmonized guitar part. That formula works beautifully again and again on the record as the two guitarists display a perfect chemistry.

The Outlaws were introduced for years as “Florida’s Rock and Roll Guitar Army,” and fans won’t be disappointed today. From the stomping country tradeoff licks of “Hidin’ Out In Tennessee” to the stinging guitars of “The Flame,” there’s lots of playing going on.
Lyrically, many of the songs talk about the history of the band and the obvious rebirth. Vocally, Paul dominates the proceedings, singing most of the songs in a voice that is instantly familiar for the band’s original fans. In fact, songs Paul doesn’t sing don’t have the same zip.

It’s About Pride will go down as one of the surprise records of the year. Thomasson and Jones must be looking down and smiling happily at what their old pals have put together.