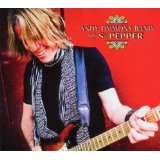 To translate one of the touchstones of popular music is not something most guitarists would attempt, but Timmons and his trio take the Beatles’ classic and turn it into an instrumental rock album that stands on its own merits. In the liner notes, Timmons says he arranged the tunes without going back and listening. Doing it from memory helped in a couple of ways. First, it ensured that the arrangements, while close, were not just slavish copies of the originals. Second, when Timmons interjects something, like tacking Abbey Road’s “I Want You” onto the end of “Being For The Beneﬁt Of Mr. Kite,” it doesn’t detract from the feel. It also helps that he turns that guitar segment into a blues tour de force.

Many listeners would immediately point to the use of horn fanfares and strings on the original record, and on the title cut and its reprise Timmons translates those into ﬂowing guitar lines that simulate the horns perfectly. When he attacks the orchestral part on “A Day In the Life” (quite the challenge these days, what with the great Jeff Beck version), he does it with a slide up the neck of the guitar and arpeggiated notes. On the uptempo middle McCartney segment, his multitasking is nothing short of spectacular.

The record also shows off the skills of Mike Daane on bass and Mitch Marine on drums, and, not surprisingly, proves how well-written the songs on Sgt. Pepper’s Lonely Hearts Club Band were in the ﬁrst place. “Lucy In The Sky With Diamonds” gets a psychedelic treatment only hinted at in the original, but Timmons never deviates far from the melody. “Fixing A Hole” is the perfect example of how he mixes melodies with original Beatles guitar parts. “When I’m Sixty-Four” is given a full-on jazz/ country treatment that never really leaves the whimsical territory staked out by the Fab Four’s version. The project wraps up with the only non-Pepper’s cut, “Strawberry Fields Forever.” Timmons and band had been doing the song live, and it’s what actually led to the CD’s concept. The liquid solos and the appearance of “I Am the Walrus” during the fade make it the perfect wrap-up to a great listen.

Geoff Muldaur – The Guitar Artistry Of