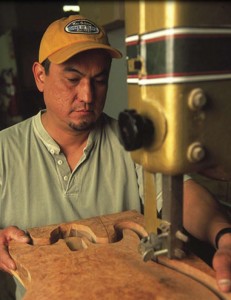 Premier Builders Guild (PBG) announced today that Art Esparza has joined the company and will work with Gene Baker and his team at its workshop in Arroyo Grande, California. He will focus on the USA Masterbuilt reissues PBG is producing for D’Angelico Guitars, the first of which will be introduced at next month’s NAMM Show.

Esparza worked at Fender for more than 18 years, where he was mentored by noted builders including John Page, J.W. Black, and Phil Kubicki. During that time, he designed and built instruments for Eric Clapton, Buddy Guy, John Mayer, Ernie Isley, and others. Since leaving Fender in 2006, Esparza has created custom instruments under his own name while designing, building, and repairing guitars as a consultant for a leading boutique brand. An accomplished sax player, he has also gigged regularly at several major casinos.

“PBG has taken an innovative approach to the production of U.S.-made masterbuilt guitars and I’m excited to be a part of it,” said Esparza. “The D’Angelico reissues are both challenging and satisfying, and I’m looking forward to their introduction.”

Eddie Van Halen to Young Musicians: “Go After It, Pursue It”