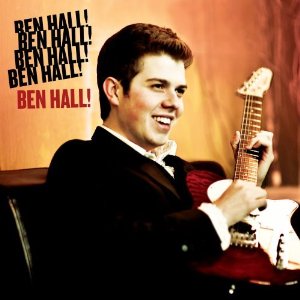 After violin virtuoso Niccolò Paganini died in 1840, several violinists claimed to be possessed by his spirit when they performed his violin concerto. I wonder if Chet Aktins has managed a similar supernatural transposition through Ben Hall.

To say this young picker plays like Chet Atkins is an understatement; he channels Chet’s style with an eerie verisimilitude that deﬁes logic. It’s one thing to be able to play the licks, but what Hall does is far more than that – his overall aesthetic and style is a throwback to Chet’s prime.

For his ﬁrst recorded outing, Hall used a trio with Sammy Merendino on drums and Skip Ward on bass. On several cuts, including “Mimi & Me,” he goes solo – no extra-tracks or nuthin’. But even when he does employ drums and bass, the guitar is the focus, as well it should be.